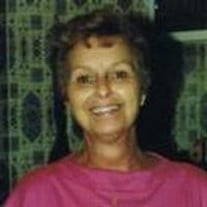 Elizabeth "Betty" Dean (Bryne) Tornow of Fife Lake, formerly of Adrian, Michigan, died peacefully on the evening of December 17th, 2010. She was born in Detroit, and grew up in a lace-curtain Irish household. Betty spent much of her youth in Fife Lake until 1948 when she married Donald Tornow and began her family. Once married, Don Tornow rejoined the military and they moved their family countless times to numerous locations over the next 21 years.With great love, care, and dedication, Betty wove that the same level of commitment into every aspect of her 82 years of life and into her roles as a beloved and respected wife, mother, and grandmother. At various points, she was a business owner, Village President, Fife Lake Rescue Unit Leader, and Chief Organizer of the Fife Leke. 4th of July parade.In 1974, she returned to Fife Lake to stay; she bought a building that she developed into Tornow's Village Inn. During those years, she became greatly involved in the village. She was instrumental in leading the Fife Lake Rescue Unit as an E.M.T. She was on the town council for over 20 years serving at all levels and finally became an intrinsic member of the Downtown Development Association with wonderful contributions to the beauty, charm, and versatility of Fife Lake.Betty had 5 children: Michael, Donald, Susan, Mariana and John; 10 grandchildren and 2 great-grandchildren, all of whom survive her as well as her beloved husband, Don.She taught love, understanding, tolerance, honesty, and courage in her example every day. Any and all who knew her will miss her and remember her with the fondness and admiration.Visitation was held on Tuesday, December 21 from 2-4 p.m. and 6-8 p.m. at Wolfe-O'Neill Funeral Home. The funeral service will be held Wednesday, December 22, at 11 a.m. at St. Aloysious in Fife Lake with Reverend Norman J. Dickson, S.J. officiating. Burial will be in the spring in St. Aloysious Cemetery. Condolences may be left online at www.wolfeoneill.com. Arrangements were made by Wolfe-O'Neill Funeral Home, our family serving yours.

Elizabeth "Betty" Dean (Bryne) Tornow of Fife Lake, formerly of Adrian, Michigan, died peacefully on the evening of December 17th, 2010. She was born in Detroit, and grew up in a lace-curtain Irish household. Betty spent much of her youth in... View Obituary & Service Information

The family of Elizabeth "Betty" D. Tornow created this Life Tributes page to make it easy to share your memories.