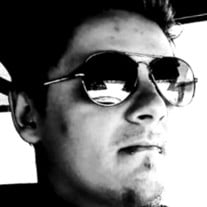 Dustin James Robert "Duddy" "Dud” “Dusty", age 25 of Kalkaska, gained his wings on Tuesday, June 8, 2021, in a tragic accident. Dustin was born on September 13, 1995. He loved to play guitar, banjo, drums and well, anything with strings and anything that made sound. He was an incredibly talented young man who taught himself to play by ear. He would listen to a song he liked over and over and would not stop until he could play along with the artist. He also enjoyed fishing, camping, hunting, snowmobiling, and getting dirty at a mud bog. Dustin recently found a new passion and that was riding his motorcycle on the open roads. Most of all Dustin enjoyed sitting around a bonfire with family and friends joking and laughing about the good times and planning the next adventure life brought his way. Dustin was a proud and loving father to his 6-year-old son, Riley James Robert whom he loved so much. Dustin always put good family first no matter what. He was a smart, bright, intelligent young man who would go out of his way to give the shirt off his back to anyone in need. He frequently paid for others behind him in line or pick up a grocery bill and those are just a few of his many qualities and if you were lucky enough to be his friend or part of the family you knew this about him as there's nothing he wouldn't do for them or others that were in need even if it was just plain crazy. Dustin always rose up and met every challenge that faced him. You could see the talent Dustin had especially when he thought outside the box. Dustin is survived by his son, Riley James Robert; his mother, Carol L. Wheeler-Nulf; his brother and his best friend, Cody Rebone; his dad, George W. Nulf; his father Douglas J. Robert; grandmother, Georgie (Dan) Mcnamara Zemke; paternal grandmother, Nancy Robert (Leif) Erikson; his maternal aunt Carla (Ed) McNamara Elliot; his paternal aunts Tammy Cherniawski, Tina and Therese Garvy; uncles, Dan Nulf, Jamie Nulf, Michael Elkins, and Scott Elkins; his Naw Cinda Elkins-Shell; close cousins, Christopher Cinader, and Craig Cinader, and so many more loved ones whom loved Dustin and will be missing him. Dustin is preceded in death by his grandfathers, Harold A. “Pa” Ingersoll and his grandpa James "Jim" Zemke; his grandma Mary Garvy, and his grandpa Chris Nulf and his great uncle Clifford Mcnamara. "It's not goodbye, it's see you later" A memorial to celebrate Dustin’s life will be held at the Moose Lodge, 2210 M-66, Kalkaska at 1:00 p.m. on the Saturday, June 26, 2021. Cremation has taken place per Dustin's request. Cremation arrangements provided by Wolfe-O’Neill Funeral Home, our family serving yours.

The family of Dustin James Robert created this Life Tributes page to make it easy to share your memories.

Send flowers to the Robert family.