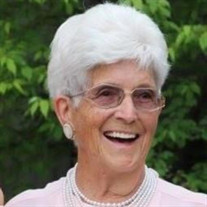 Dorothy Emilie Augusta Pingel Monette, age 99, of South Boardman, Michigan, passed peacefully into the Lord and Savior’s arms on April 19, 2021 with family by her side. Dorothy was born February 3, 1922 to Henry J. Pingel and Bertha Mayfield Worden Pingel on her family farm in Lapeer County Michigan. Her Grandpa Pingel was an immigrant from Germany who came here in pursuit of the American Dream. Growing up on her family farm, Dorothy talked about the hard work, picking huckleberries, cutting ice from their lake for the ice house, growing vegetables and processing dairy products for sale in the city. She said that farmers were better off than the city people as they were self-sufficient. Dorothy only completed 8th grade and then worked at other jobs as many did to help their families and talked often about the depression and how difficult it was. In 1939 she met Raymond Monette through mutual friends. To her parent’s dismay, Dorothy eloped to Beattyville, Kentucky in 1940 with Raymond, they went to the Justice of the Peace were married and returned to Michigan. It would only be a short time and Dorothy’s husband would be on a ship to England to serve in WW II. Dorothy and Raymond had their first child, Garry Raymond Monette in 1943 and moved to Kalkaska County in 1946 to farm, following several years of Raymond coming to the ‘great north’ to deer hunt. They had 3 more children, Raylene, Diane and Debbie. In 1954 the polio epidemic impacted the family and Munson Hospital became Dorothy’s home away from home. Dorothy was, as she said, “a jack of all trades”. While farming continued for them, she assisted with all the field work, filling silos for many area farmers, and cutting trees and boughs from their cedar swamp to sell for the making of wreaths. Hard work never got in the way and she would regularly take their 1953 Allis Chalmers WD45 farm tractor all around the area to help work gardens, plow fields, skid logs in exchange for money and even a pony once. In the spring of 2019 Dorothy was overjoyed when she was reunited with this very tractor. Dorothy was also a school bus driver for 15 years for Boardman Area Schools, cleaned houses, babysat for families, planted and pruned Christmas trees, worked at what was Cherry Growers and the old restaurant in Boardman before it burned. Dorothy always said that she refused to learn how to use a chain saw for fear she would have to help with that too. She was a very hard-working woman who took on any and all work and would often go without to provide for her family; she liked to claim her possession of a PHD or rather “post hole digger”. When looking at her Social Security checks she would comment, “I bet they didn’t expect to still be paying me this”. Dorothy attended and worked at The Boardman Area Senior Center for many years, with many of her good friends. She chuckled that she was still getting a paycheck in her 80’s and early 90’s. She missed being able to help with the bake sales needed to assist the Center with their expenses. She always looked forward to her visits with her longtime friend Lamora, who visited her regularly. Dorothy was known for her cooking of many good dishes, but especially for her home-made cream puffs. First in line for Dorothy’s heart were her grandchildren and great-grandchildren, who brought her so much joy, followed by her gardens with the flowers serving as a showpiece. Dorothy would plant vegetables and flowers by the acre at her Bass Lake Rd home. She would say, “I want to enjoy my flowers before I die”. Some of her most favorite sayings were, “I’m this old because I played in the dirt”, “do you know how old I am”, “I love you a bushel and a peck, and a hug around the neck”, and “I’m too stubborn to quit”. Dorothy wanted to visit with all and truly enjoyed a good conversation. It was quite common for her to start up a dialogue with complete strangers and leave them feeling like they were old friends. In her elder years it was usual for her to spark up a chat by asking, “Can you guess how old I am?” The astonished reaction of these new friends, when they would learn Dorothy’s actual age was 10 to 20 years greater than their assumption, would make her glow with delight. She was very proud of her age. Dorothy is survived by her daughters, Raylene (James) Wilborn, Diane Joyce Ravitch and Deborah Lou Hill; grand-children Jennie Ravitch, Tammie (Travis) O’Neill, Jennifer (Joseph) Madigan, Megan (Perry) Daniels, Emily (Wayne) Golden and Mindy Hill (Joey Leach); great grand-children Max Ravitch, Jaylee and Liberty Madigan, Hallie and Harper Golden; Eldon and Zoe Gunnerson; many nieces and nephews. She is preceded in death by her husband Raymond and son Garry Raymond Monette; parents, Henry J. Pingel and Bertha Mayfield Worden Pingel; her brothers George Pingel, Charles Pingel, Johnny Pingel and Irwin Pingel. A private family service will be held. This is the zoom link for the service. https://us02web.zoom.us/j/9745277754?pwd=Vlc3QU8xS0dWWjh3Tm1MKzJxRzBJZz09 Password is 1111. Monday, April 26, 2021 at 11:00 a.m. Family will have a celebration of life at a later date. Interment will be held in Boardman Township Cemetery. In lieu of flowers memorials may be made to Boardman Area Senior Center P.O. Box 92, South Boardman, MI 49680 in Dorothy's name. Arrangements provided by Wolfe-O'Neill Funeral Home, our family serving yours.

Dorothy Emilie Augusta Pingel Monette, age 99, of South Boardman, Michigan, passed peacefully into the Lord and Savior&#8217;s arms on April 19, 2021 with family by her side. Dorothy was born February 3, 1922 to Henry J. Pingel and Bertha Mayfield... View Obituary & Service Information

The family of Dorothy Emilie Monette created this Life Tributes page to make it easy to share your memories.

Send flowers to the Monette family.