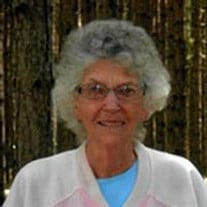 Doris E. Way 1925 - 2016Doris was a go-go girl up until her last day. Where ever you wanted to go. Whatever you wanted to do. She didn’t initiate much, but she was always game. She loved driving on country roads looking for deer, hunting morel mushrooms, collecting stones on the beach and watching her “story,” Days of Our Lives. She and her sister Arlene were famous for making butterscotch pie. She was a card shark in euchre— even up until just a few years ago.She was born on August 4, 1925 in Rapid City to the late Thomas and Pearl Peterson. Doris and Chuck raised 5 kids on Walnut Street, right next door to her mother, whom she cared for until her mother passed away. She kept a clean house, made homemade bread and spent a lot of time on her porch swing. She always kept the cookie jar and candy dish full for her grandkids. She is preceded in death by her husband Charles Ferris Way and son, Gregory Claude Way, and all of her brothers and sisters except Al Krumlauf.Doris worked the 3-11pm shift as an LPN at the hospital until she retired some time after Chuck died. Later she came up every day to help her daughter’s grooming business where she loved on all the dogs, especially Joyce’s dog. Doris is survived by her children, Sandra (John) Ferguson, Joyce Hogerheide, Keith (Cynthia) Way and Ronald (Belinda) Way, 15 grandchildren, 19 great grandchildren and 1 great-great grandchild. Doris was a member of the Kalkaska Church of Christ for many years. She sat in the same pew, week after week where everyone would come to greet her and give her a hug.She was a bit on the reserved side and never interfered. She made an art out of how not to worry—perhaps that’s how she lived so long. Alzheimers took Doris’ memory, but it never took her sense of humor. Maybe it wore away some of her reserved nature because after she moved to Hope Village, she became something of an instigator with a parade of friends following her lead. Everyday they’d go looking for rocks for her collection. One day it was white stones, the next it was sparkled stones. That only ended when she fell and broke her arm. She couldn’t believe she broke her arm picking up a stupid stone. She and her friend, Gladys, thought it was hilarious to push the button for the door to open and make a run for outside without a staff member to supervise. They said they were just testing to see how long it took the staff to come running! She frequently shared that living at home was best, but if you couldn’t be there, Hope Village was the place to be! Wolfe-O’Neill Funeral Home, our family serving yours.

Doris E. Way 1925 - 2016Doris was a go-go girl up until her last day. Where ever you wanted to go. Whatever you wanted to do. She didn&#8217;t initiate much, but she was always game. She loved driving on country roads looking for deer, hunting... View Obituary & Service Information

The family of Doris Ella Way created this Life Tributes page to make it easy to share your memories.

Send flowers to the Ella family.