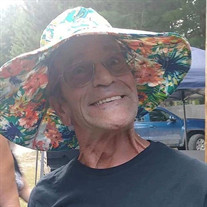 Donald "Don" Douglas, Jr. of Alden, passed away on Sunday, November 24, 2019, surrounded by his family. Don was born in Saginaw, Michigan to the late, Donald L. and Ruthann (Rogers) Douglas on September, 5, 1960. Don is survived by his wife,... View Obituary & Service Information

The family of Donald "Don" Lewis Douglas Jr. created this Life Tributes page to make it easy to share your memories.

Send flowers to the Douglas family.