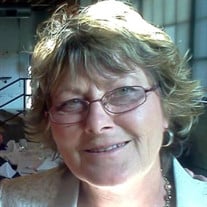 Diane Lynne Russell, age 67, lost her battle with lung cancer and was welcomed into the arms of Jesus the afternoon of Monday, August 31, 2020. Diane died peacefully at the home she shared with her loving husband of 27 years, Richard Thomas Russell. Diane was born in Grand Rapids, Michigan on March 4, 1953. She is preceded in death by her mother Theressa (Holwerda) Johnson, her sisters Llona Davis, and Karen Danielson, and her brother Michael Johnson. She is remembered by her husband: Richard Thomas Russell; her children: Jalon (John) Ekholm, and Richard Wade Hunter Marr; her grandson: Koby Ekholm; her sisters and spouses: Dixie and James McFarland, Phillis Piccard; her brothers-in-law: Earl Davis, and Dave Danielson; her father and mother-in-law: Merrill and Margaret Russell; her sisters-in-law and spouses: Patty and Dave Reglin, and Denise and Jim Nielson; as well as many nieces, nephews and special friends. Diane grew up in Grand Rapids, Michigan and was known to have a fiery, independent, fun-loving, playful, one of a kind spirit – even as a child. In her 20’s, Diane attended Cosmetology School in Chicago where she earned her barbers license. She was a practicing barber for many years until she stepped in to manage her husbands siding and construction business in the later years of her life. Recreationally, everything was a spontaneous adventure to Diane. Her children can remember many times suddenly packing up the car and taking an unplanned trip somewhere fun and exciting when they were young. She loved spending time with her husband, family, and friends camping, boating, water skiing, riding snowmobiles and ATV’s, and socializing with anybody and everybody. Diane never met a stranger… everybody was a friend. Diane had a HUGE heart for helping people, and animals. She loved her dogs, and also frequently gave to the ASPCA. Diane touched the lives of a number of less fortunate people who benefited from her caring support and loving intervention. When Diane was a child, her Sunday school teacher, Mabel Carter, showered her with an abundance of love and attention, and also taught her about Jesus. Mabel was the angel that God chose to guide Diane to Jesus Christ and she stayed close to Him throughout her life. She also spoke of Mabel’s influence and love for her frequently all throughout her life as well. There will be a small private memorial service to honor Diane’s life held at Blythefield Memory Gardens at a later date to be determined. Due to COVID-19 and size restrictions, only a small number of family and friends are permitted to attend. Cremation arrangements provided by Wolfe-O’Neill Funeral Home. Our Family Serving Yours.

Diane Lynne Russell, age 67, lost her battle with lung cancer and was welcomed into the arms of Jesus the afternoon of Monday, August 31, 2020. Diane died peacefully at the home she shared with her loving husband of 27 years, Richard Thomas... View Obituary & Service Information

The family of Mrs. Diane L. Russell created this Life Tributes page to make it easy to share your memories.

Send flowers to the Russell family.