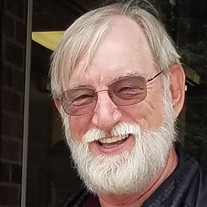 David L. Lydick, 69, of Charlevoix, Michigan, died peacefully at home on March 23, 2019 of pancreatic cancer. David was born in Detroit to Helen (Stanton) Lydick Cooper and was raised in Battle Creek, Michigan, by his mother and stepfather, Franklin Cooper. After graduating from Springfield High School, he joined the Air Force where he served with distinction at various duty stations in Florida, Germany, Alaska, Michigan, New York, Greenland, and Colorado. He retired from the Air Force after 21 years and began a second career at Hughes/Raytheon Corporation in Colorado, retiring after another 20 years. He met his wife, Charlene, while he was serving at the Empire, Michigan Air Force Station. The couple married in 1980. They have one daughter, Kimberley Csar of Houston, Texas. David and Charlene lived in the Denver, Colorado area for 33 years before returning to their home state of Michigan in 2016. David was an avid golfer. For many years, he played regularly with his two longtime friends, Paul and John. Charlene affectionately referred to the trio as “the Saints” and Tuesday golf days were sacrosanct. Another warm weather passion was riding his motorcycle. With Charlene riding along (sometimes with closed eyes), the couple traversed every extreme ride in the Colorado mountains and other parts of the western US. One of David’s greatest joys was taking a solo ride on unexplored roads. When not riding or golfing, David could often be found cheering on the Detroit Lions or Michigan Wolverines; and frequently yelling at the television about a bad call or a bad play. Some of his grandchildren’s first words were “Go Blue!” David was a voracious reader and was always reading multiple books at a time. Science fiction and Civil War history were his two favorite genres. David and Charlene enjoyed traveling and taking road trips across the US. However, his favorite trip was to Texas to visit his daughter, son-in-law and two grandchildren. He was a member of Christ the Savior Lutheran Church, Aurora, Colorado, for over 30 years. During that time he served on the church council and in various volunteer capacities. He was also a volunteer at Family Promise of Greater Denver which provides temporary shelter and finds affordable housing for homeless families. David is survived by his wife of 39 years, Charlene; daughter Kimberley (Alex) Csar; grandchildren Holton and Charlotte; godson Kyle Winchell; sister Carol (Kent) Harms; brother Stephen (Sharon) Cooper; sister-in-law Myrna Curtis; brother-in-laws Gary DeYoung and Patrick (Nadine) DeYoung; and numerous nieces and nephews. He was preceded in death by his mother Helen, stepfather Franklin, and brother-in-law Tracy Curtis. Husband to Charlene, Dad to Kimbers, and Pappy to Holton and Charlotte; he was well loved and will be greatly missed. David requested that remembrances be joyful and that Hawaiian shirts or bright colors be worn. Two memorial services will be held: in Michigan on April 4, 2019, 12 noon, at the Charlevoix Community Reformed Church, Charlevoix, Michigan; and in Colorado on May 4, 2019, 10:30 am, at Christ the Savior Lutheran Church, Aurora, Colorado. In lieu of flowers, memorials may be made to Christ the Savior Lutheran Church, 1092 South Nome Street, Aurora, CO 80012

David L. Lydick, 69, of Charlevoix, Michigan, died peacefully at home on March 23, 2019 of pancreatic cancer. David was born in Detroit to Helen (Stanton) Lydick Cooper and was raised in Battle Creek, Michigan, by his mother and stepfather,... View Obituary & Service Information

The family of David L. Lydick created this Life Tributes page to make it easy to share your memories.

Send flowers to the Lydick family.