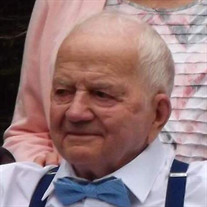 Cornelius “Cor” Uitvlugt knew and loved every one of his dairy cows. He named each one, and knew where and how to milk them based on each individual temperament. He called his cows in from pasture using the traditional call “come boss,” knowing his cows would come running toward their loving caretaker. On February 12, 2019, Cor, 88 years old, was finally called home by his own loving Savior. As expressed in Matthew 11:28 NIV, “Even the strongest of us have moments when the burdens of life seem too great. It’s then that the Lord whispers to our hearts,come to me, all you who are weary and burdened, and I will give you rest.” Cor is now resting with his Lord and Savior. Cor, a lover of Christian music, died while listening to his favorite song, “Don’t Tie Any Strings on Me.” He was surrounded by his loving family. Cor was born on Woodman Road on April 7, 1930 during a snowstorm. He was called home by his God amidst the same snow falling silently on his beloved land in South Boardman. The birth and death of Cor, however, is not nearly as relevant as all the days and nights he lived between those two dates. Cor was a strong man in both body and spirit. He spent his days tirelessly tending to his land and animals, in his signature attire of well-worn work boots, tan Carhartt coveralls, and of course, a snapback feed hat. There was no physical burden he couldn’t bear (he was known to carry heavy pails well into his later years) and, perhaps more importantly, no emotional or spiritual burden he wouldn’t take off another’s shoulders. No matter how busy he was, Cor would stop whatever he was doing to help a neighbor or fellow farmer in need. Through the ups and downs of life he never asked God “why?” Instead, he steadfastly kept his faith, worked hard, and supported his family. He often worked multiple jobs to ensure his wife, Donna, could be home with their five beloved children. Despite his busy schedule, as often as he could he took an afternoon “tea break” with Donna, enjoying a cup of Red Rose with plenty of milk and sugar. Cor also supported his community, most notably playing an instrumental role in the establishment of Victory Baptist Church and Boardman Bible Church. He could often be found reading the Bible, and spent many evenings reading passages aloud to his children. Through his last days, Cor maintained the wit, humor, and kindness for which he was known. Even on the hard days, his family and caregivers were treated to meaningful (and often hilarious) remarks from Cor—a testament to the consistency of character that came to define him. Cor is survived by his loving wife of 66 years, Donna; beloved children, Jacob (Barb) Uitvlugt of South Boardman, Martin Uitvlugt of Leelanau, Annette (Daniel) Marvin of Kalkaska, Melette (Thomas) English and Noland Uitvlugt, all of South Boardman; 10 grandchildren, 6 great-grandchildren, 1 great-great grandson, many nieces and nephews, and his sister, Anna Harvey of East Lansing. Cor was preceded in death by his siblings Rina, Henry, Jeanette, Agatha, Aggo, and Martin. Please join us in celebrating the life of Cor on Thursday, February 21st at 11:30 am at Kalkaska Church of Christ. Family will be socializing at 11:00 am. He will be buried at Boardman Township Cemetery in the spring. In honor of the wonderful caretakers who allowed Cor to live out his last days on his beloved land, memorial gifts may be made to the Area Agency on Aging of Northwest Michigan, 1609 Park Dr, Traverse City, MI 49696. We welcome your condolences, and encourage you to share your favorite memories of Cor, at wolfeoneill.com. Arrangements were made by Wolfe-O’Neill Funeral Home, our family serving yours.

Cornelius &#8220;Cor&#8221; Uitvlugt knew and loved every one of his dairy cows. He named each one, and knew where and how to milk them based on each individual temperament. He called his cows in from pasture using the traditional call &#8220;come... View Obituary & Service Information

The family of Cornelius "Cor" Uitvlugt created this Life Tributes page to make it easy to share your memories.

Cornelius “Cor” Uitvlugt knew and loved every one of his dairy...

Send flowers to the Uitvlugt family.