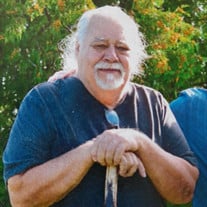 Clark Smith Collins, age 76, of Traverse City, MI, passed away peacefully with his family by his side at Munson Medical Center, Sunday, January 5, 2020. Clark was born December 31, 1943 in Washington DC to the late William and Eileen (Smith) Collins. Clark grew up in Maryland where he spent much of his youthful years on the shores of the Chesapeake Bay perfecting his fishing techniques. In 1970 he moved to northern Michigan where he married Wendy (Chambers) Worley and then later to Joanne (King) Tuck. Clark owned a successful furniture repair business for many years. His work can still be seen in many hotels, businesses, and homes in the Grand Traverse region. He then went on to teach at-risk kids, whom he loved dearly, at The Beaver Island Lighthouse School, and later worked for his brother's construction company in Maryland until retirement. Clark's greatest job came after retirement when he took on the role of Grandpa. His grandbabies were his whole world and he could often be found on his daughter's deck collecting bugs, pointing out birds, singing a silly song, passing out treats to the neighborhood kids or carving a walking stick with a grandbaby on his lap. Clark is survived by those grandbabies that he loved so dearly; Jakob Roach of Scottsdale, AZ, Marlee Smith, Kalyn, Brody, and Brayden Moore all of Traverse City along with his three children, Lisa (Collins) Spake of Scottsdale, AZ, William "Buddy" Collins and Chanda (Curtis) Moore of Traverse City, five siblings; Oma Brooks, Janis Behn, Kay (John) McIntire, John "Buddy" (Lori) Collins, and George Nicholson, and numerous nieces and nephews. Clark was welcomed into Heaven by those who went before him; his parents William and Eileen and four siblings; Wilma, William "Billy", Eileen "JR" and Jimmy. Cremation has taken place and a private family memorial will take place at a later date. Arrangements were made by Wolfe-O’Neill Funeral Home, our family serving yours.

Clark Smith Collins, age 76, of Traverse City, MI, passed away peacefully with his family by his side at Munson Medical Center, Sunday, January 5, 2020. Clark was born December 31, 1943 in Washington DC to the late William and Eileen (Smith)... View Obituary & Service Information

The family of Clark Smith Collins created this Life Tributes page to make it easy to share your memories.

Send flowers to the Collins family.