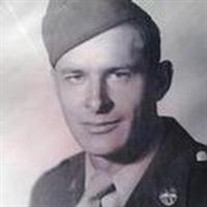 Charles Pierce Wilfong, age 95, passed away at his home in Kalkaska on Monday, April 22, 2013. He was born on July 21, 1917 in Whitehall, IL to the late Sidney and Jessie (Becraft) Wilfong.Charles married Hazel J. Alumbaugh on September 11, 1935 in Grand Blanc. Together they raised 3 wonderful children, Joan, Janet, and Robert. Charles was a member of the U.S. Army and served in Los Alamos, NM during 1945 & 1946 where he worked on the Manhattan Project. He worked at Pontiac Motors as an Industrial Engineer for 38 years and retired at age 57. Charles was a Lifetime Member of the American Legion and a member of the Kalkaska Rotary Club for 20 years. He was also a former member of the Oakland County Boat Club, Ortonville Rotary Club, Paul Harris Fellow Club, Hadley Township Zoning Appeal Board, and Lapeer County Ambulance Board.Charles and Hazel were members of the Kalkaska Senior Center for 25 years where they ran Bingo on Friday nights and one afternoon a week. He was also involved in finances and management of Senior Haven in Kalkaska. Charles and Hazel were residents at Kalkaska Memorial Health Center – LTC for the past 2 ½ years.Charles’ family would like to thank the staff at Kalkaska Memorial Health Center for their outstanding help and caring. Also, many thanks to the Munson Hospice staff.He is survived by his devoted wife of 77 years, Hazel; his loving daughters, Joan Knauf of Kalkaska and Janet (Jerry) Inscho of Oxford; 8 grandchildren, Jeff (Norma) Wiggins, Cynthia (Marv) Coy, Joel Wiggins, Sandra (Bob) Eggert, Kim Hahn, Linda (John) VanderGraff, Susie (Joe) Kerns, and Brian Dennison of Ortonville; 19 great-grandchildren; and 8 great-great-grandchildren.Charles was preceded in death by his son Charles Robert “Bob” Wilfong who passed away in January of this year.A memorial service for Charles will be held on Wednesday, May 1, 2013 at 1:00 p.m. at the Kalkaska Memorial Health Center Assisted Living. A graveside service will be held on July 21, 2013 at 1:00 pm at White Chapel Cemetery in Troy. Memorial contributions may be given to Munson Hospice, 210 Beaumont Place, Traverse City, MI 49684.Condolences may be left online at www.wolfeoneill.com.Arrangements were made by Wolfe-O’Neill Funeral Home, our family serving yours.

Charles Pierce Wilfong, age 95, passed away at his home in Kalkaska on Monday, April 22, 2013. He was born on July 21, 1917 in Whitehall, IL to the late Sidney and Jessie (Becraft) Wilfong.Charles married Hazel J. Alumbaugh on September 11,... View Obituary & Service Information

The family of Charles P. Wilfong created this Life Tributes page to make it easy to share your memories.

Charles Pierce Wilfong, age 95, passed away at his home in Kalkaska...

Send flowers to the Wilfong family.