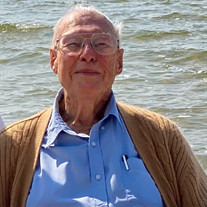 Charles Bruce Huntington, 94, of Petoskey, passed away peacefully at home on January 4, 2022, of natural causes. Charlie was born in Flint, MI on December 22, 1927, the 5th and last-born child of JT and Ilah Huntington. He received his associates degree in business at Lansing Business College after returning home from 2 years in the Navy and had a career in banking and real estate. He married Audrey (Hartman) in 1947. They had two children, Charles Bruce ll and Lucinda Lee. He was a very loving father. They made their home in St. John's, MI. In 1986, he married Helen Anderson Lewis. They moved to Waverly, Virginia where they spent a wonderful 25 years, singing, playing their recorders, performing around the community, biking, picnicking, and socializing, while living life to the fullest. They moved back to Michigan in 2010 to be near family in their later years. Charlie was instrumental in keeping music in the family and often played recorders with his wife and daughter. He also loved playing baroque music with various groups...especially playing duets in church with a flautist. He performed in his church until he was 93. Charlie also loved collecting art and remodeling old homes. He left behind exquisite carpentry in the homes he remodeled in St. Johns, MI and in Waverly, VA, turning them into colonial works of art. Charlie was preceded in death by his parents, four siblings, his son Charles Bruce II, and three grandchildren, Charles Bruce III, Keri Stevens and Kylie Huntington. Charlie is survived by his wife Helen, daughter Lucinda Stampski of Canadian Lakes, two stepdaughters, Lynn (Bob) Williams of Mt Clemens, MI, and Maureen (Dale) Scott of Harbor Springs, MI, one grandson, Jeremy Stevens of Florida, two great granddaughters and two great great grandchildren as well as many nieces and nephews. Memorial services will be postponed until a later date. Memorial donations may be made to the United Methodist Church of Petoskey. Contact information: Helen Huntington, Box 857, Harbor Springs, MI 49740 Arrangements provided by Wolfe-O'Neill Funeral Home, our family serving yours.

Charles Bruce Huntington, 94, of Petoskey, passed away peacefully at home on January 4, 2022, of natural causes. Charlie was born in Flint, MI on December 22, 1927, the 5th and last-born child of JT and Ilah Huntington. He received his associates... View Obituary & Service Information

The family of Charles B. Huntington created this Life Tributes page to make it easy to share your memories.

Send flowers to the Huntington family.