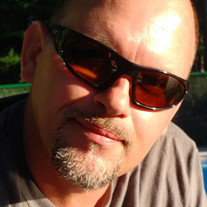 Bryon Lee Harrington of Kalkaska, Michigan married to Crystal Harrington, passed away peacefully after a brief battle with cancer on Sunday, January 19, 2020, surrounded by family at home. He was born on December 28, 1971, to the late Linda (Smith) and David Harrington. Bryon was an alumni of Kalkaska Blazers class of ‘91, where he ran cross country. He was a great fan of the Michigan Wolverines. He enjoyed spending time with his five children and 12 grandchildren. Camping, fires, going down the river, and watching a good football game were some of his favorite pass-times. As an active part of DeColores, Bryon became a mentor and a wonderful influence to many people and gained many brothers and sisters in Christ. Bryon was a man of great faith and an active member of the church community in the surrounding areas. Resurrection Life Church of Traverse City is his family’s home church. Kalkaska Screw Products was his place of employment for several years. Here he met some great friends and a wonderful support system. He is survived by his loving wife of 23 years, Crystal Harrington (Mann); their five children, Malerie Wellington (Mann), Nicolas (Veronica) Young, Gabrialle Harrington, Seth Decent, and Joab Harrington; his brothers, David Harrington, Jeffrey Schram and Joshua Harrington, as well as his 12 grandchildren. Bryon is leaving behind too many family members and friends alike. Bryon is preceded in death by his sister, Deanna and his father-in-law, Harley Mann. He is holding a fork in his hand because the best is yet to come. “When this is over, then the party starts. My party in Heaven next to Jesus”- Bryon Harrington. The family honors the memory of Byron invites you to visit and share memories on Thursday, January 23, 2020, at Wolfe-O’Neill Funeral Home from 2:00 until 4:00 p.m. and 6:00 p.m. until 8:00 p.m. A funeral service will be held on Friday, January 24, 2020 at 12:00 p.m. at Wolfe-O’Neill Funeral Home. A visitation will begin at 10:00 a.m. until the time of service. Memorials are suggested to Northern Michigan DeColores c/o Barbara Adkins 3812 Perimeter Drive, Traverse City, Michigan 49685 Arrangements entrusted to Wolfe-O’Neill Funeral Home, Our Family Serving Yours.

Bryon Lee Harrington of Kalkaska, Michigan married to Crystal Harrington, passed away peacefully after a brief battle with cancer on Sunday, January 19, 2020, surrounded by family at home. He was born on December 28, 1971, to the late Linda... View Obituary & Service Information

The family of Bryon Lee Harrington created this Life Tributes page to make it easy to share your memories.

Send flowers to the Harrington family.