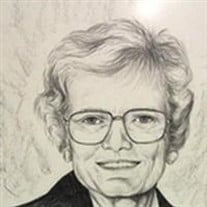 Bernice "B" Trimble Steadman, age 89, passed away at her home in Traverse City, on Wednesday, March 18, 2015.  Following is a biography chronicling the life of this incredible lady. No services are planned at this time. Arrangements were made... View Obituary & Service Information

The family of Bernice "B" Steadman created this Life Tributes page to make it easy to share your memories.

Bernice &quot;B&quot; Trimble Steadman, age 89, passed away at her home...

Send flowers to the Steadman family.