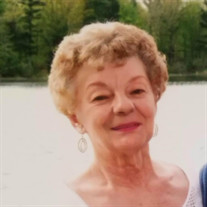 Sunday July 28th, 2019 Barbara Ann Kowalewski, 80 years old passed away at home. She was born on April 13, 1939 to Michael and Gertrude(Butkiewicz) Polansky in Detroit. On December 1, 1956 she married Robert (Bob) Kowalewski. They were married for 53 wonderful years. Barbara and her husband Bob moved to Fife Lake in 1970 and owned/operated The Logs Resort. She was one of many people that helped implemented and served on the ambulance service in Fife Lake that still operates today. After retiring from Sara Lee they moved to Lake City. In 2015 she moved to Kalkaska where she was able to see more of her great grandchildren play in their sports. Barb loved to go to the casino with her friends, watch game shows, fishing, golfing, and scary movies. She loved to do paint by numbers and gifted to family. Everyone that has received one of her beautiful paintings cherishes them dearly. She is survived by her children, Patty (Brian) Golden, Mark (Mahannah) Kowalewski and Stan (Debbie) Kowalewski; grandchildren Cheri (Jeremy) Wilkinson, Michael and Dylan Golden, Josh and Robert Kowalewski; great grandchildren Makenzie, Madison and Hunter Wilkinson; Brooklyn, Aidin, Liam and Kyle Kowalewski, sister Cecelia Polansky, sister in law Gerry Polansky, niece Joanie Peplowski, sister in law Janet Randell and many cousins, nieces and nephews. She was preceded in death by husband Robert (2009), her father Michael (1968), mother Gertrude (1987), brother Michael Polansky (2012), sister Dolores Peplowski(1995), and nephew John Peplowski(1988). Please donate to https://www.cancer.org/involved/donate/memorial-giving.html

Sunday July 28th, 2019 Barbara Ann Kowalewski, 80 years old passed away at home. She was born on April 13, 1939 to Michael and Gertrude(Butkiewicz) Polansky in Detroit. On December 1, 1956 she married Robert (Bob) Kowalewski. They were married... View Obituary & Service Information

The family of Barbara Ann Kowalewski created this Life Tributes page to make it easy to share your memories.

Send flowers to the Kowalewski family.